Mohammad* had already been forced to rebuild his family business from scratch once before.

After selling imported products for five years, he was proud to begin manufacturing plastic and rubber tubing on home soil in Mosul, northern Iraq. But then he lost everything when ISIS invaded.

It all came down to rubble after an airstrike from the coalition forces hit my factory and demolished the whole building as ISIS was using it to launch attacks and store their weapons at the time.

Mohammad managed to revive the business after the liberation of Mosul in 2017 and says he hoped for a new beginning.

It is a family business. My four brothers and I have been working in the factory for about eight years. It gives us and our families a much-needed livelihood. It was also important for us to maintain the family name, as our reputation is a very important part of our business.

In 2020, they were dealt another unexpected blow when COVID-19 appeared in Iraq. COVID-19 restrictions forced Mohammad and his brothers to shut the factory down for nearly three months.

It was an unfortunate period, and my business made a lot of losses. I feared that this will lead me to close it and I worried that I won’t be able to support my family anymore.

Like many other SMEs in Iraq, Mohammad’s business suffered severe revenue losses due to COVID-19 lockdown measures. A series of surveys conducted among nearly 900 Iraqi SMEs by the International Organization for Migration (IOM), the Food and Agriculture Organization (FAO), and the International Trade Center (ITC) highlights the severe impact forced shutdowns had on small businesses across all sectors. Respondents reported average losses of 67% in revenue between February and June 2020. Revenues did show partial recovery later in the year but were still 23% lower in December 2020 than pre-pandemic levels. 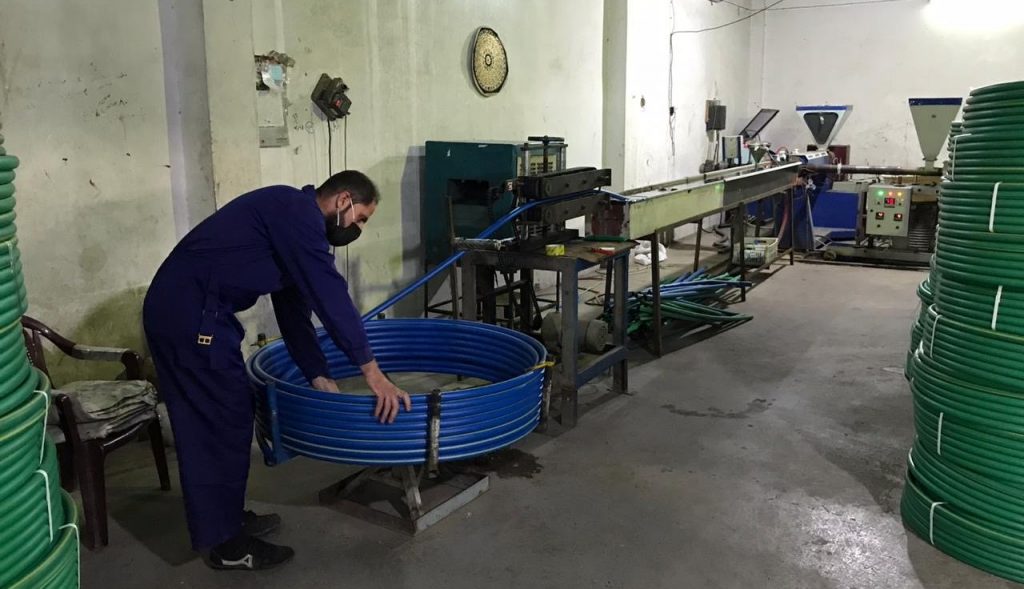 Mohammad’s business was one of the 23 SMEs to receive a relief loan through NII’s COVID-19 SME Support Programme. The programme, supported by USAID through a gift from the American people, provided Mohammed with the funding he needed to pay salaries and purchase raw materials to resume operations. His factory uses recycled plastic as wells as plastic nurdles sourced from both local and international suppliers.

The funding I received helped me to sustain my business and enhanced my cash flow.

The COVID-19 crisis also deeply impacted the ability of Iraqi SMEs’ capacity to retain employees. According to the abovementioned survey, the average reduction in employment from February to June was 27%. Although the opening up of the economy allowed surveyed SMEs to bring employees back after June, employment has not yet reached pre-COVID-19 levels. Thanks to the NII relief loan, Mohammad’s business continues to employ 14 people.

Khalil*, who handles the administrative side of the business, says the pandemic has been stressful for him and his family. He was nervous about losing his job like others in his community.

I was happy to keep my job as the factory has become a second home for me. I am also sustaining the livelihood of the [other] people working in the factory as well.